Share a memory
Obituary & Services
Tribute Wall
Read more about the life story of Ella and share your memory.

Memorial Services for Ella Marie Voelker, 101, of Stanton, will be 11:00 a.m., Monday, January 30, 2023, at the Home for Funerals Chapel, 708 Georgia Avenue. Reverend Linda Mohr will officiate. Visitation will be one hour prior at the chapel. Burial will be at a later date. Home for Funerals is in charge of the arrangements. The service will be livestreamed on the funeral home’s website.

When Ella was an infant, her mother had a fatal car accident, after which she was adopted by her aunt and uncle, Dewey and Sylvia Pont of Stanton. Their three daughters became her sisters. Ella described herself as the “leader” of her sisters.

After graduating from Stanton High School in 1940, Ella was united in marriage to Alfred Voelker of Stanton, Nebraska, May 25, 1941.    Al and Ella farmed together Southwest of Stanton until 2002.  They were married 74 years until Alfred’s death in 2016.

Ella was very precise and creative.  She applied these talents to sewing, quilting, crocheting, and educating others in 4-H. Many local organizations benefited from her bookkeeping and organizational skills.

Her hobbies were baking, ballroom dancing, and playing cards. She played cards every week her entire life, even with limited vision in her later years.

She was preceded in death by her husband Alfred, her son Donald, sisters Althea Heller (Pont) and Betty Crane (Pont). 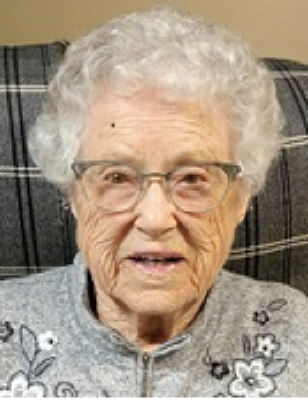